Thanks to all who participated in their LOCAL Skywarn nets this week.  You are all helping make amateur radio shine.

As a reminder, Mark, N7XYO mentioned the importance of getting Skywarn net reports to your section leadership.  Thanks to those nets who submitted their report in a timely manner.

The reminder is copied below:

Reminder it's VERY important to send a net report after every net, including  SKYWARN - Storm Spotter nets.

Net reports are very important information that the ARRL compiles and this data is useful in the battle against all that wish to rob Radio Amateurs and our community of our use of these bands.  Please report.

Here is the information on how & to whom to send net reports to for the Oklahoma section.

Please after any net in which you are Net Contol Station/Operator (NCS), please sent a short net report.

Here's how to and to whom: (see sample report at bottom of this e-mail)

First - Cut and Paste the following list of e-mail addressed into a e-mail:

Second - Send a brief summary of the net activity:

Note we do NOT need the traffic logs from these Nets... this short report will provided the information needed.

Please that the short few minutes and send in a report.

Thank you for your service,

If you don't know the details about H.R. 1301, please log on to the
ARRL website (www.arrl.org) and type "HR 1301" in the Website
Search box located in the upper right hand corner of the ARRL Home
Page.

H.R. 1301 has made good progress in this session of Congress.  The ARRL
Washington Group made up of Chris Imlay, ARRL Chief Counsel and Director
Mike Lisenco, Hudson Division have made three attempts to arrange a
compromise with Home Owner Association's lobbyists who oppose the
legislation.  I did not approve of the compromise attempts as I felt
the compromises offered would result in a weak bill which would not
protect amateurs living in HOA's.  As it turns out, all of the
compromise attempts were rejected by the HOA lobbyists and we are now
back to the original language of the bill.  I don't anticipate any
further efforts to compromise.  So far, the bill, in its original form,
has attracted 125 cosponsors in the House.  It takes 218 positive votes
to pass legislation so, as you can see, we need to collect more
cosponsors.

Recently, I reviewed the list of cosponsors and found that none of the
Oklahoma delegation has signed on to the bill!  When I was at the Green
Country Convention earlier this month, I asked the hams there why there
were no one on the Oklahoma delegation listed as cosponsors.

I was told that the Oklahoma Congressmen that had been contacted by
members stated that they were concerned about the federal government
interfering in "private contracts".  As you know, CC&R's are
Convenants, Conditions & Restrictions imposed on a home buyer when a
home located in a Home Owners Association is purchased.  CC&R's are
NOT contracts.

For more details on CC&R's go to:

You might want to view the ARRL produced video, The Amateur Radio
Parity Act: Separating Fact from Fiction, on Youtube.  It is only 5
minutes in length and it addresses the complaints lodged by opposition
HOA's lobbyists.  Go to:

Complete information on the Oklahoma delegation is available at this
URL.


Why am I sending you this E-Mail?  The answer is that I will be at
Washington, D.C. on Tuesday, May 3rd.  It is my intent to visit each of
the Oklahoma Congressmen to ask for their support of H.R. 1301.  In
order for me to be successful, I need your help…..and there is not
much time.

If each of you will send a member specific letter to your Congressman
asking them to cosponsor H.R. 1301, it will make my job easier.  If
there are no supporting letters, it is likely that I will be shown the
door without delay.   After all, why should a Congressman agree to
cosponsor legislation unless his/her constituents ask them to?  There
is no such thing as too many letters.

As soon as you receive this newsletter go to this web address, fill out
the form and send it.  The letters will be delivered and I might just
get the attention of staff when I visit your Congressman's office.

Go to this address

On that page, type in your Zip Code and click <GO>

On the next page you fill in your personal information (name, address,
etc).  You may also edit the pre-loaded letter in the box if you wish.

When you are ready to send the letter, click the <SEND> button.

PLEASE PLEASE PLEASE
When you receive this newsletter, immediately go to the address listed
above and fill in your information.  The more letters the more likely
your Congressman will cosponsor H.R. 1301.


Thanks for your support and wish me luck.


Thank you for all your help with the SKYWARN - (Amateur Radio) Storm Spotter nets.

I ask you to remember that it's VERY important to send a net report after every net, including SKYWARN - Storm Spotter nets.

Net reports are very important information that the ARRL compiles and this data is useful in the battle against all that whish to rob Radio Amateurs and our community of our use of these bands.

Here is the information on how & to whom to send net reports to for the Oklahoma section.  Please after any net in which you are Net Contol Station/Operator (NCS), please sent a short net report.
Here's how to and to whom: (see sample report at bottom of this e-mail)

First - Cut and Paste the following list of e-mail addressed into a e-mail:
ke5lta@arrl.net, n7xyo@arrl.net, kc5fm@arrl.net

Any comments: (i.e. 3 Tornados reported, damage reports taken by Smallville EOC on 146.940 etc.)
Note we do NOT need the traffic logs from these Nets... this short report will provided the information needed. Please that the short few minutes and send in a report.

Thanks to Mark, N7XYO for this reminder.

Media regularly contacts your Section leadership for details about what is happening in the Section.  Please give reports, as mentioned above, so your efforts can be acknowledged.

Where do you operate? #ARRL #HamRadio 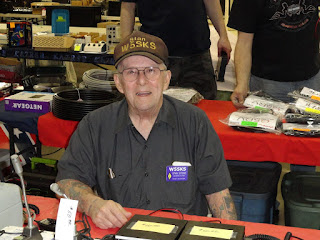 Do you recognize any of the faces at Green Country this year?  Thanks to Mark, K5MRK for sharing. 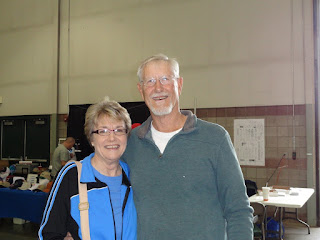 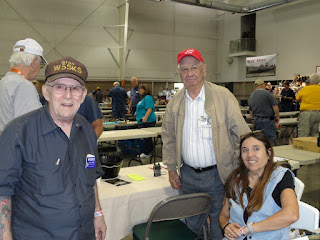 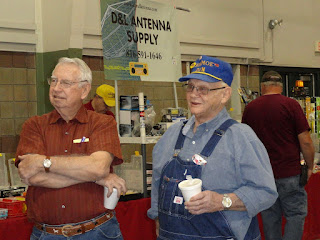 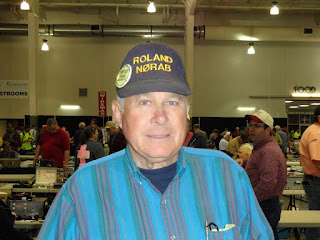 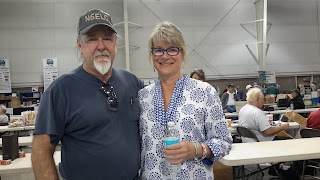 Please note the location has changed from last year.

Seminars on D-Star, DMR, Fusion, Winlink and CWOP will be presented on Saturday.

OKDXA and QCWA will hold meeting on Saturday also.

A Boy Scout Radio Merit Badge session will be conducted on Saturday.

Thanks to Tom, WA9AFM for this information.

The Annual WGD awards program is now open to receive nominations.  It
is time to start working on your submissions for the WGD 2016
Divisional Awards which will be presented at the West Gulf Division
Convention at HamCom in June. Nominations for the 2016 Award Winners
will be accepted until May 1, 2016.

Nomination forms for each nominee (by category) must be supported by at
least three ARRL members on the award nomination form, a minimum 150
word statement, and any available supporting documentation. Other rules
do apply and can be found on the
nomination forms.

Go to http://arrlwgd.org/?p=1450 to display the actual forms and
instructions.

The Division Awards judging panel consists of four (4) ARRL members
selected by each of the Section Managers in North Texas, Oklahoma,
South Texas and West Texas Sections. The Section Manager may opt to
appoint his/herself to the committee. The fifth judge is selected by
the Division Director and may reside anywhere within the West Gulf
Division. Neither the Division Director nor the Vice Director will
participate in the vote.

Please make 2016 the year that you nominate that outstanding member of
your club that you know deserves Division level recognition for all the
good things he or she do for amateur radio.

H.R. 1301, the Amateur Radio Parity Act, has passed the House
Subcommittee on Communications and Technology.  Rep Greg Walden-R
Oregon, W7EQI, is the Chairman of the Subcommittee.  It now waits for a
hearing before the full House Energy and Commerce Committee.  There have
been two behind the scenes compromises to the text of the bill made by
the ARRL's Washington group made up of ARRL's Chief Counsel Chris
Imlay, W3KD, and Mike Lisenco, Hudson Division Director, N2YBB.  It is
my understanding a full hearing of the House Energy and Commerce
Committee will  be scheduled soon.  I don't have a date as yet.

Dave Sumner, often referred to as "Mr. Amateur Radio" and who has
been at ARRL HQ's in Newington, CT, for 34 years officially retires
April 18th.  The new ARRL CEO, Tom Gallagher, NY2RF, takes the reins of
the over 100 year old ARRL on that date.  Tom is already in residence at
ARRL HQ's and has spent the past several weeks making ready for the
transition.

Tom has agreed to attend HamCom June 10-11 in Irving, TX, and the
Oklahoma Section Convention in Oklahoma City on July 22-23.  He will be
at the ARRL forums at both conventions and will also be available at the
ARRL booths.  Drop by and meet the new ARRL CEO, Tom Gallagher.

Killeen, Texas, will be the site of the 2016 USA ARDF Championships.
The Texas ARDF group and the Austin Orienteering Club will stage
classic competitions on two meters and 80 meters, plus sprints,
foxhunting and optional practice courses from April 6 through 10.  Most
events will be at the Parrie Haynes Youth Ranch, which has over 2000
acres of equestrian trails and facilities for other outdoor sports.
USA's ARDF Championships are open to all.  Visiting competitors from
outside USA are welcome.  Some of USA's medal winners will be invited
to compete on Team USA at the ARDF World Championships in Bulgaria next
September.

ARRL Convention and Hamfest events are a great place to visit with the
Division and Section Leadership. Each event will also include an ARRL
forum where you can receive additional insight into Division and
Section matters.

At any time that you have a concern or just want to say hello, contact
Director Woolweaver at K5RAV@arrl.org


The Oklahoma City Memorial Marathon, better know as the 'Run To Remember',
was established in 2001 to remember 'those who were killed, those who
survived, and those changed forever' by the Murrah Federal Building bombing
on 19 April, 1995. The amateur radio community supports the Marathon with
over 80 radio operators providing public safety and logistics communication.

A special event operation, inaugurated in 2015, will return this year to
commemorate the Marathon and share the celebration of the "Run To Remember"
with the world-wide amateur radio community.

If you wish to operate as a Marathon Special Event Station, contact one of
the following event administrators to register your station:
WA9AFM - wa9afm@arrl.net
NE5SD - steve.ne5sd@gmail.com

On race day, a station will also be on the air at Mile Marker 13 (halfway
point) on the race course to close out the event.