Thanks to Cindy, K5CED, a Tulsa area Public Information Officer with the Oklahoma Section, Charlie Calhoun K5TTT and his sons, and Mark Conkin, N7XYO, the Section Emergency Coordinator, for traveling to Field Day sites to bring you these photos.

Thanks to John, N5AUS, the Division Vice Director and Kevin, N0IRW, for braving the weather to come to Enid, Elk City, Altus, Lawton and other sites this year. 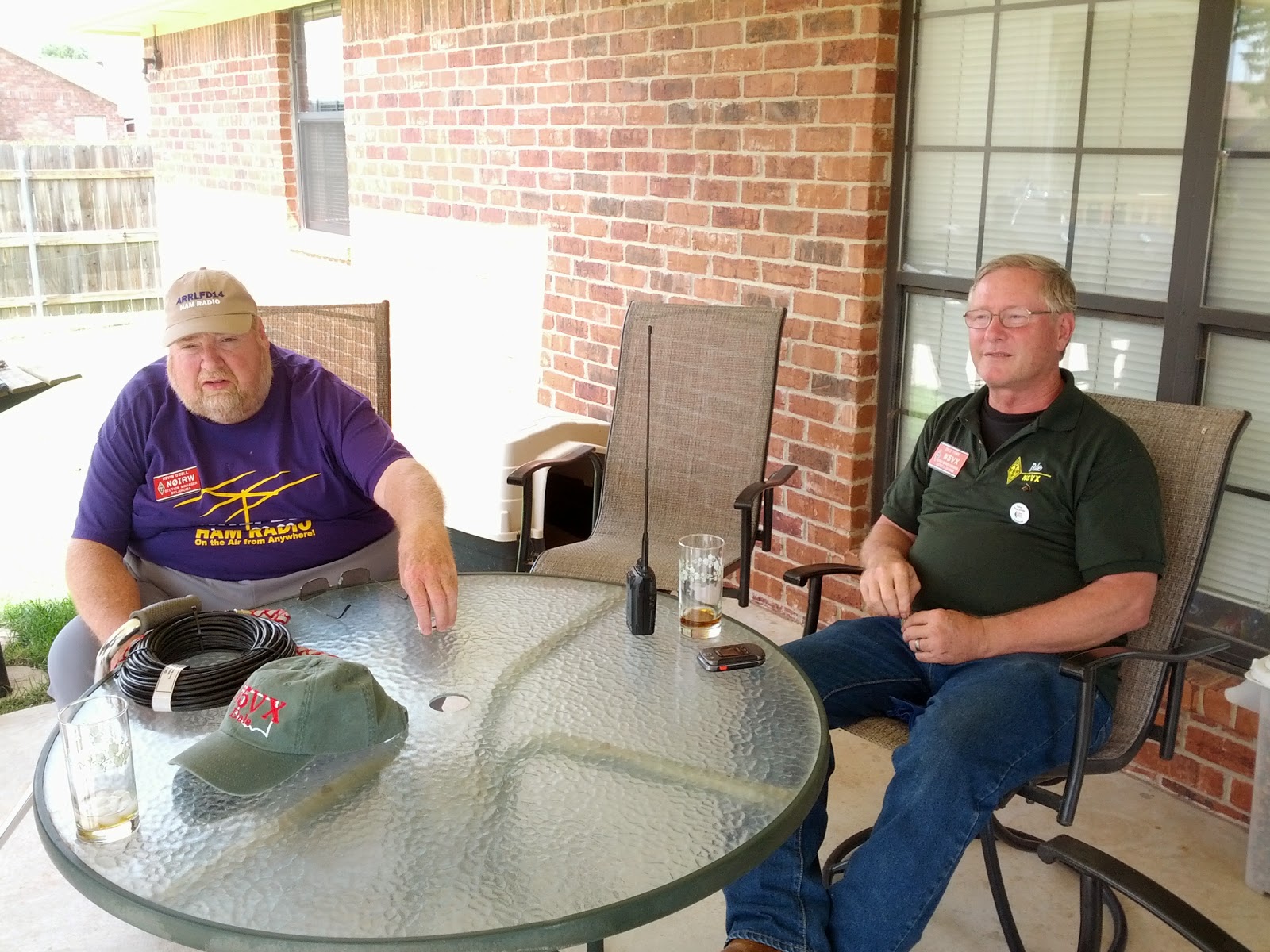 For Sale items in Oklahoma City

Thanks to WA9AFM for this information.
Posted by KC5FM at 10:00 AM No comments:

Some photos of the Broken Arrow Amateur Radio club's field day event preparation and set up: 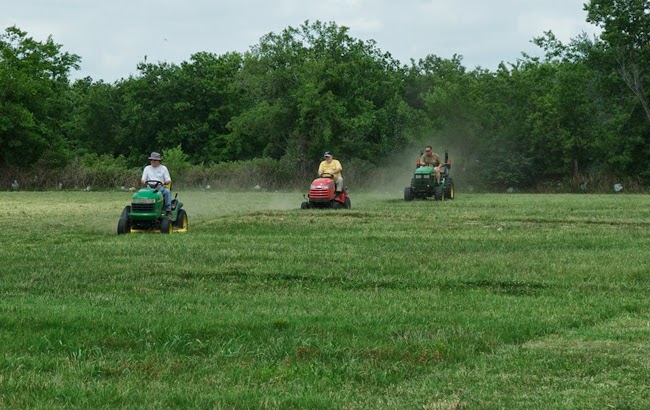 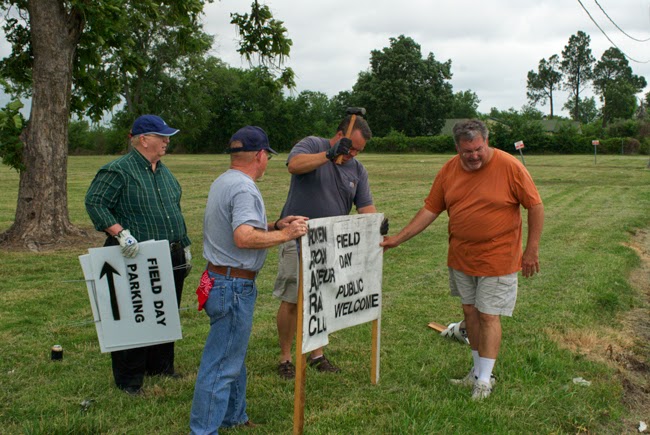 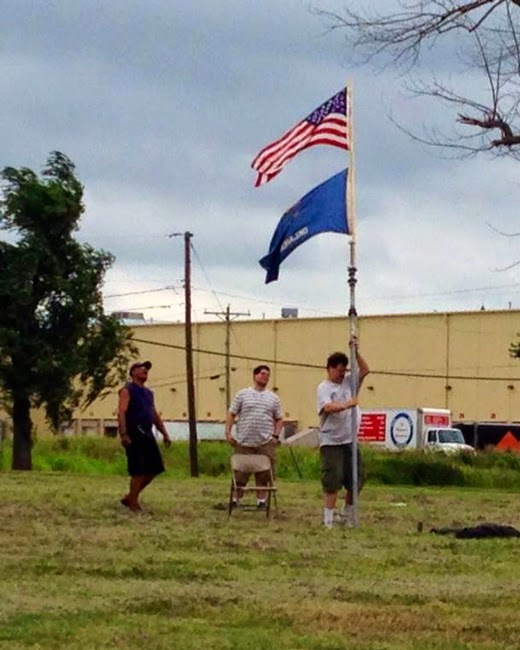 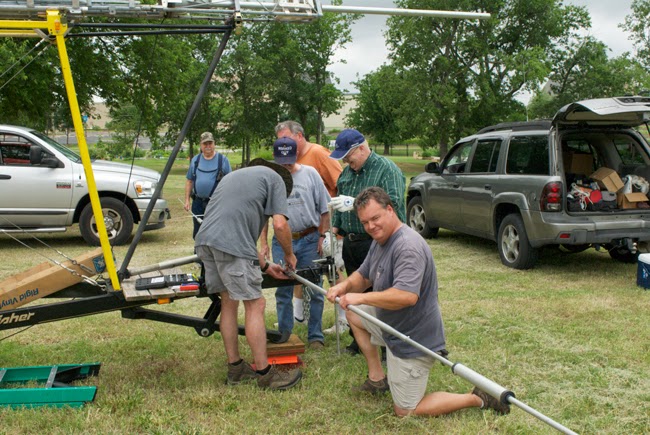 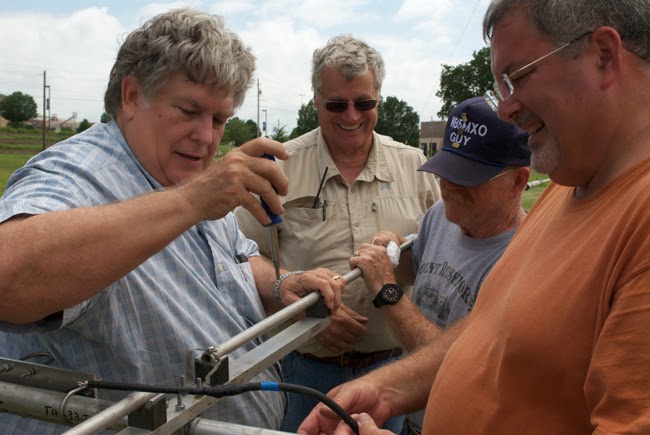 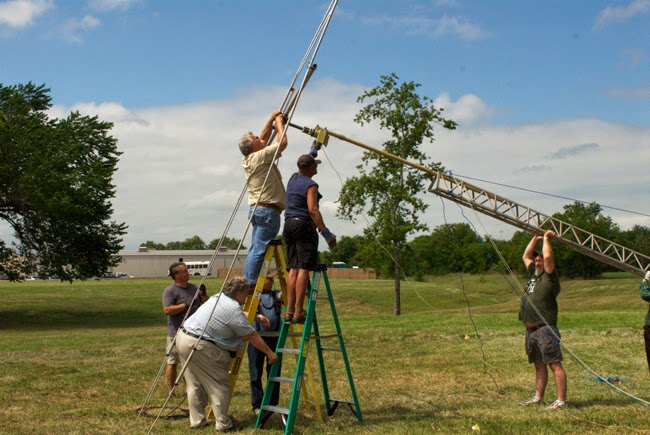 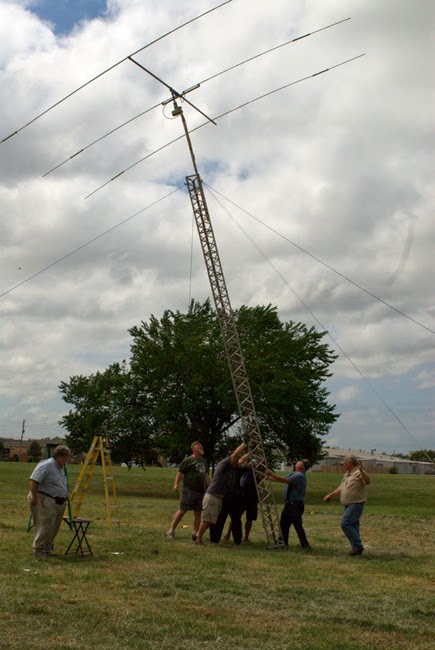 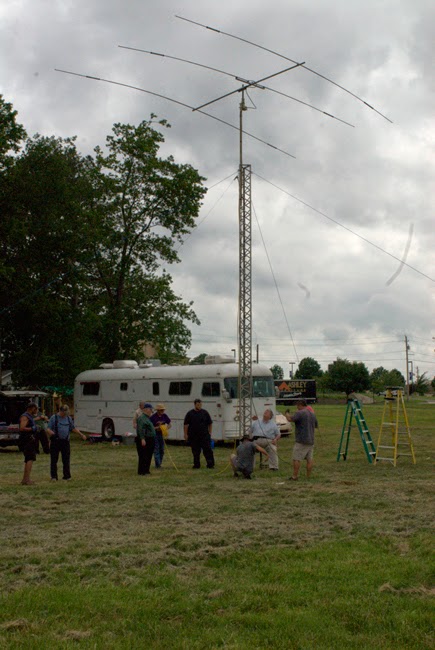 Posted by Cindy Downes at 8:00 AM No comments:

The station will operate from the Wichita Mountains Wildlife Refuge where CCC camps 812, 859, 870 worked on many conservation projects.

Thanks to KB5MQL for this information.
Posted by KC5FM at 11:00 AM No comments:

From Altus to Vinita and Ardmore to Woodward, amateur radio operators will be using their radio stations to participate in a National Preparedness Drill called "Field Day", announced officials with the American Radio Relay League.

Governor Mary Fallin and the Mayor in Altus have declared the week of June 22-28 as Amateur Radio Week in Altus and Oklahoma​​.

Field Day closes out the week June 28-29 with many clubs setting up Saturday and operating through noon Sunday.
Persons interesting in visiting a Field Day site near them can locate that site online at http://www.arrl.org/field-day-locator
A number of clubs around Oklahoma are active in the Oklahoma City and Tulsa areas as well. Also, some individuals have listed their Field Day operations.

For more information about amateur radio, http://www.arrl.org is the National Organization for Amateur Radio.

Edmond Amateur Radio Society is providing support to LibertyFest 2014.  Assistance will be needed on June 28 and 29 and at the July 4 Parade.

Understanding that this includes Field Day weekend, any volunteers will be great. Contact WA6LBU

Years back, the Collector and Emitter was a very popular newsletter distributed to folks around the Oklahoma Section.

It appears that the newsletter is being revived through the efforts of two amateur radio clubs so far.

Check it out at

This is not only the 36th annual HamCom convention it is also the ARRL
Regional Centennial Convention hosted by both the West Gulf Division
and the Delta Division.  If you cannot attend the National Centennial
Convention in Hartford, CT on July 17, 18 and 19, you can still
celebrate the 100th anniversary of the ARRL by traveling to the Plano
Convention Center on June 13-14.  For more details go to
www.hamcom.org.

The keynote speaker at the 11:00 AM Saturday June 14th ARRL Forum will
be Riley Hollingsworth, K4ZDH.  Riley is the retired FCC Special
Counsel for the Spectrum Enforcement Division.  His subject will be
“Our Responsibility to Amateur Radio”.  In addition, the annual
West Gulf Awards will be announced and the winners honored.  Special
awards will be present by both the West Gulf Division and the Delta
Division.

Don’t miss the ARRL EXPO which will be located at the entrance to the
main exhibit hall.  Meet ARRL officials from Headquarters Newington, CT.
If you are an ARRL member, don’t forget to pick up your special
commemorative challenge coin at the ARRL Booth and while you are there,
meet Hiram Percy Maxim.  He will be standing in front of the W1AW
building.  You heard that right!  Hiram will be present to help
celebrate the 100th anniversary of the ARRL.  If you are not an ARRL
member, drop by the booth and join!

By special arrangement, the Denton County’s massive County Logistical
Emergency Assistance Telecommunications Utility Service vehicle
(CLEATUS) will staffed by volunteers provided by the Dallas Amateur
Radio Club.  In addition to CLEATUS, the Delta Division is providing a
communication trailer which will also be staffed and operational.

Plans are to begin operation at noon and run through
noon on Saturday Primary frequencies will be 40, 20, 15 and 10
meters depending upon propagation.  Operating frequencies are:

If you want to volunteer as an operator, go to the Dallas Amateur Radio
Club’s web site www.w5fc.org and follow the links.

The Wouff Hong ceremony is one of the cherished traditions of amateur
radio.  Created by the Old Man himself to promote good operating
practices, the legend lives on.  If you are not already a member of the
Royal Order of the Wouff Hong, don't miss this chance to join.  Ceremony
will be held at the Holiday Inn Express, 700 Central Parkway East,
Plano, TX,  June 13 at 10 p.m. Thanks goes to the Dallas
Amateur Radio Club for sponsoring and staffing the event.

Welcome to Summer in Oklahoma!

To start things off, it is now official, Beginning October 1st, Lloyd Colston, KC5FM will be the new Oklahoma Section Manager.  After a lot of thought, I have decided to step down.  Wilma and I are going to do some things for us that will cut into our available time and weekends.  I am still going to be involved in League affairs as I am still on the national PR Committee and part of the Division staff.  I want to thank everyone for making my tenure as your SM a very enjoyable time.  I appreciate your support.  Please give Lloyd the same help you have given me and the section will continue thrive.

Now on to other stuff…..Our generator legislation, which seemed to be going great, died when it never came out of committee in the House.  It passed the Senate unanimously  and we were very hopeful,  but alas.  We will try again next year,   If you have a VERY good relationship with either a State Representative or Senator in your area, let Eddie know.

Speaking of Eddie, he reports on a great gathering in northeastern Oklahoma,

The Central States group of Kadiddlehoppers recently held their semi-annual picnic May 24, 2014.  The event was well attended, some 50 at the Saturday picnic, from many States in the central part of US.  It was held at the Twin Bridges State Park on Grand Lake, near Miami OK.  Many of the group came early in the week and camped at this location.

According to the web page, which is at www.kadiddlehoppers.com, the group started in 1975 with three members.  Here is a short paragraph from the “History Page” …..

Kadiddlehoppers were born in the early 197Øs when three of the 7.253.5Ø mobile operators going about their travels were kibitzing each other on their radios, when another voice came in and stated “you guys sound like a bunch of Kadiddlehoppers”.  Steve-KØROD claimed number one, Jeff-K4KBM claimed number two and Walt-WBØMFS claimed number three.  Of course the term Kadiddlehopper came from the broadcast radio character played by Red Skelton in the 194Øs.  Fear of infringing on the rights to the name Kadiddlehopper prompted contact through a relative of Sue-WB5MWO, actor Milton Berle  as to how to obtain permission to use the name.  Permission was granted with pleasure and Mr. Skelton, even though he was not an amateur radio operator himself, was issued honorary member number 1ØØØ.

The membership is now almost up to 12,000 over these 35 some years, and the camaraderie and friendship with all was very evident.  Some contacts for the group are Norm, N0BFB, Dean, NO5E, John, AC0OL.  Many others helped make the picnic available and furnished lots of good food to eat.  Let us never forget Red Skelton and his Clem Kadiddlehopper routines.

Thanks for the report Eddie.  There are a couple of photos on the League section webpage.

All the Hamfests during the first half of the year were really great!  Here’s hoping the second half of 2014 goes as well.  The second half shows are below.

In addition to these state hamfests, there are 2 others to talk about.  First is the Centennial Convention July 17 – 19 in Hartford, CT.  In case you missed it, the League is 100 years old this year and is celebrating with a 3 day convention.  It will be packed with forums, dealers, flea market items and opportunities to meet and greet like never before.  You will also have an opportunity to visit headquarters and W1AW!  If you have never been to headquarters, this is the excuse to go.

The OKC Memorial Marathon was a great success this year.   It got a late start after storms came through, but they finally got it off about 1 ½ hours late.  The amateurs, as usual, did an exemplary job.   Thanks to everyone that made this event a success!

As I said earlier, 2014 is the Centennial of the ARRL.  There a lot of neat things coming for the balance of the year.  Make sure you get a copy of the Centennial Handbook and take a look at the ARRL Centennial Video, “The ARRL at 100”, you can watch it on YouTube at :

This is a very good production available for use at your local club meeting, hamfest and broadcast and cable television outlets.  The video is an overview of the ARRL’s first 100 years.  I think you will like it.
(If you watch all the way through, you might just see me!)

Don’t forget the Centennial QSO Party going on all year.  There a lot of different things to do in that event.  I’m even worth points!  You can find out all about it at:http://www.arrl.org/centennial-qso-party

In fact you can find out about all the Centennial events at:http://www.arrl.org/centennial  (You probably guessed that one….)

This is a wonderful opportunity to showcase Amateur Radio to the public and use the Centennial as a hook for the media exposure.  There will be additional PR materials for your use.

PLEASE!!! Don’t forget to enter your Field Day operation on the League Field Day Station Locater at : http://www.arrl.org/field-day-locator  I’m pretty sure Vice-Director John Stratton, N5AUS and I will be traveling to the west side of the state. but if your operation isn’t on the locater site, I won’t know where you are to possibly show up.  This is also a good time to try and get the inactive hams in your area out and get them re-invigorated.  You can also get the new hams on HF and get them hooked for good, not to mention upgraded.

I am excited to announce that Wilma O’Dell, W5WRO, is a new Asst. Director for Membership for the West Gulf Division.  Wilma has become a fixture at the ARRL booth in the past  couple of years and I for one thank her for her help.

I look forward to seeing all of you at one of the hamfests or other events around the section this year.  Thanks again for all you do for Amateur Radio in Oklahoma!


Oklahoma Section Manager
Posted by KC5FM at 8:00 AM No comments: