APRS is a computer-assisted (digital) mode of amateur radio communication.Accuracy is one advantage of this digital mode.Without the correct software (which is trivial to get) the information is unintelligible to the casual listener.

What is an APRS net?

The OKAPRS net occurs from 1300 to 1400 CT on the 2nd Saturday afternoon of every month.  The purpose of the net is to test APRS stations and operating practices.  In the most basic form, amateurs check-in to the net by sending a brief APRS message to the net controller.  More seasoned operators are welcome to join the OKAPRS group on ANSRVR and exchange items of interest to area hams.http://www.aprs.org/aprs.html
Participants with TNCs or Soundcard-based TNC emulation software (UZ7HO and the like) can use their PCs and radios.  Others can check in with PCs / tablets with Internet access.  There are also APRS apps for popular smartphones.A particular advantage of APRS compared to other digital modes is that communications are usually backed up in the APRS-IS system of servers.  Websites such as findu.com and aprs.fi can help you easily mine those records to assemble a log of a particular net.

How can I participate?

We’d love to have you join us any way you can.
STEP 0: Get familiar with the system by exploring the web links for findu.com and aprs.fiSTEP 1: For your first check-in, use the web tools mentioned above!STEP 2: Next time, consider checking in from your iPhone or portable device.  You’ll need an Internet connection of course.STEP 3: After a few months, you’ve caught the bug.  Try APRSIS32 software on a PC with Internet.STEP 4: You’ve added a rig interface and a VHF radio to APRSIS32.  You’re truly “on the air”.
APRS stations that include a radio are the most resilient and useful in a time of emergency.This guide is a living document.  Let me know if you have questions, comments or concerns…kd5njr@gmail.com
Who is the Net Controller?The Net Controller is typically KD5NJR.  He’d mostly likely be operating from his desktop portable APRS station (not handheld) with the callsign KD5NJR-6.  He’d use other rigs for backup and monitoring purposes; so don’t be alarmed to see a -7 or -8 out there too.  To double check, look for an APRS bulletin referring to the net coming from the NCO station.  Or look for a pre-net message.  That’ll probably be sent from the NCO.  See what station it is coming from.  You can also look for an APRS object referring to the net control operator.  He might identify himself !  See more about objects and messages later on.
Part 1 :Instructions for the Net ControllerFor ease of operations, the NCO probably wants to use a minimum of a laptop computer setup with Internet connectivity to the APRS network.  A radio connection is strongly encouraged.For best results, the NCO should be able to easily hit an APRS digipeater on low power to make your battery last the duration of the net.  I’d also suggest having a TX/RX digipeater (ex: AE5ME) within a couple hops of your QTH.Having Internet connectivity at your QTH will allow you to see the APRS activity via the IGATES on your web browser (aprs.fi or similar) as a backup.  In particular, you’ll see the users with just APRS software.  This is a good thing if your nearby IGATE is not set to transmit and is configured “RF in to Internet “only.Ask your IGATE’s trustee to upgrade from UIVIEW to APRSIS32 and enable “INET->RF”
Since the “audience” may be using a small screen like on a HT or flip phone, (see photos later on) you’ll want to keep transmissions short.  The focus of the net (with the exception of the portion on the ANSRVR chat group) should be around brief equipment tests.  They’ll check in.  You’ll acknowledge them.  Call for more checkins.  Repeat.  Close the net.
Pre-Net activitiesBulletinshttp://aprsisce.wikidot.com/bulletinsBulletins are recurring reminders.  Think “Net SAT @ 1300” 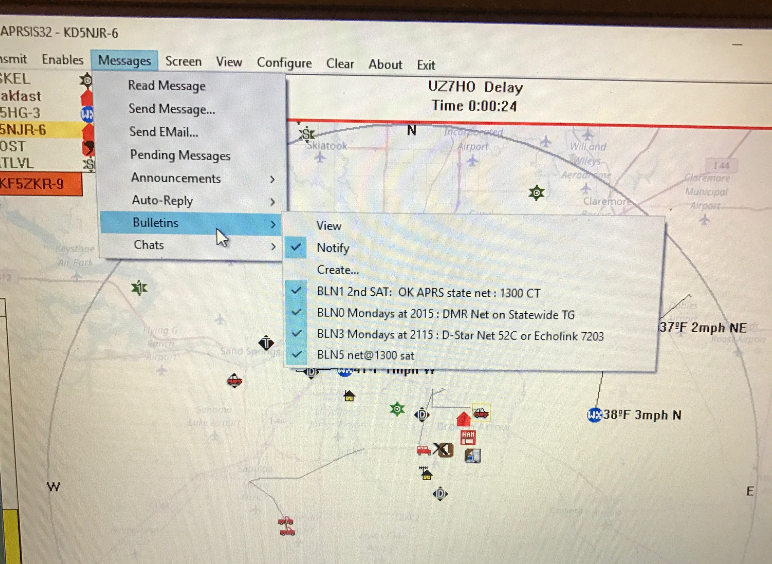 Net activitiesNet Preamblesomething easy: “Reply to check into OKAPRS net.”
Joining the ‘chat group’ on ANSRVRhttp://aprsisce.wikidot.com/doc:ansrvrhttp://www.aprs.org/cqsrvr.htmlsend a message(s) to ANSRVR: J OKAPRS CQ OKAPRS QST de kd5njr, taking checkins for net.CQ OKAPRS QST de kd5njr, taking checkins for net.CQ OKAPRS QST de kd5njr, closing net.  73.U OKAPRS
Also add to the log folks that chat in the ANSRVR group.
Running the netSeveral times during the hour solicit check-ins using messages. Add them to your log.kd5njr taking checkins for net. kf5tvg tnx for checkin.  Ur in log.
Short and sweet!  Take notes so you can form a log.
Closing the NetSend a message closing the net.kd5njr, closing net.  73.Do the same over on the OKAPRS group.
Part 2 :Instructions for participating in the net…A brief explanation of APRS: http://aprsisce.wikidot.com/doc:aprs-messaging-explained
I have been using RF with a path of wide1-1, wide2-2 so that I can hit an igate.To rely LESS on the IGATES, I have not been checking ‘BEST’ but instead choosing RF when possible.(show screen shot)
Choosing a SSID.http://aprsisce.wikidot.com/doc:ssids 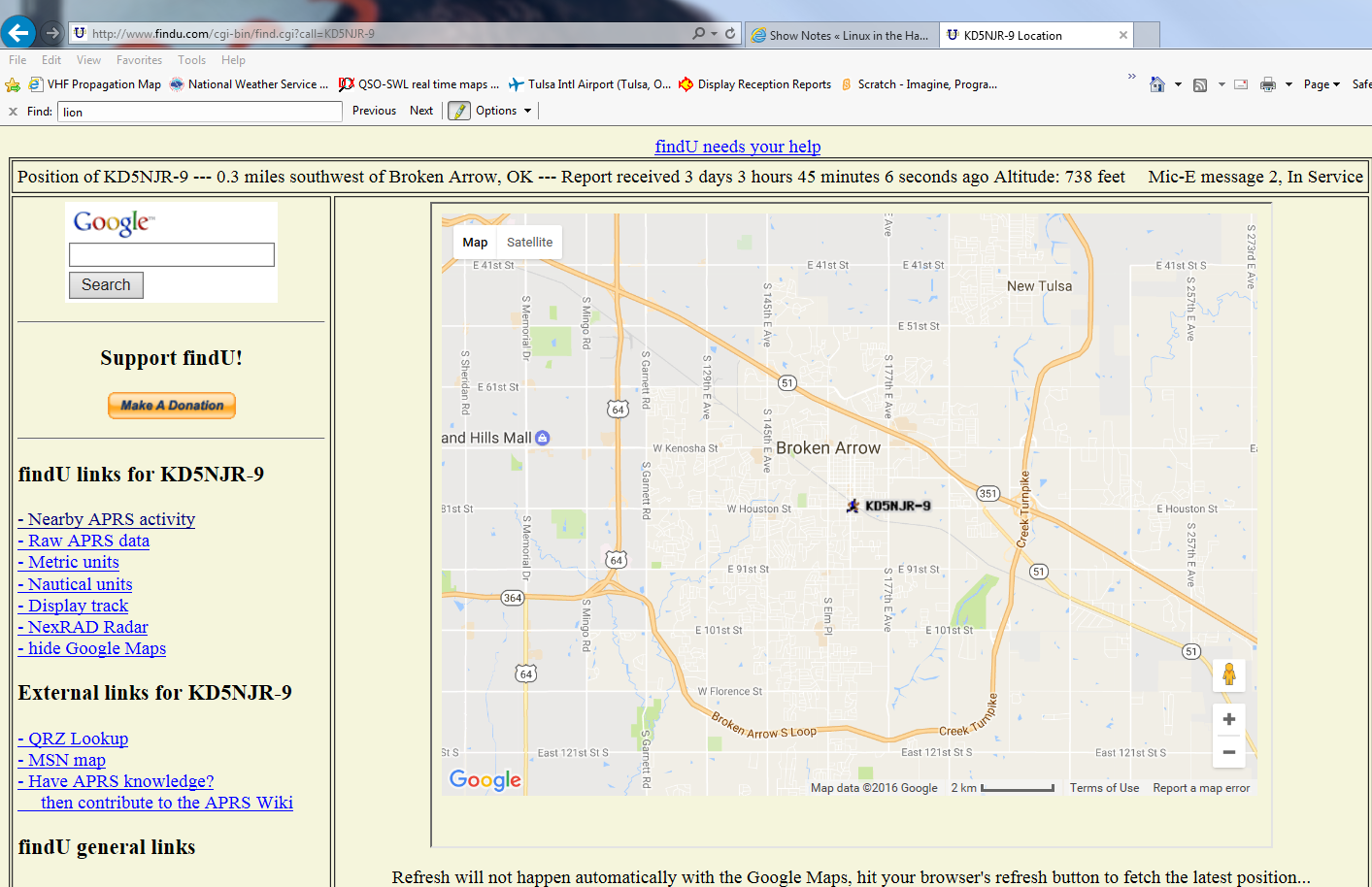 Via the Webthe two most popular web sites for viewing the APRS-IS database are www.aprs.fi and www.findu.com .( Aprs.fi is newer and perhaps a little more pretty.)Findu.com certainly gets the job done.  It’s got a little simpler layout.--Eventually I’ll have links and photos for both websites.Findu.com is unique in its facility to SEND APRS messages.Note: Your message’s recipient, if using ONLY a radio for his APRS setup, will have to be in range of a 2-WAY (bi-directional or TX/RX IGATE for best results) Otherwise, you maybe not receive back ACK of your messages.
Viewing Objects 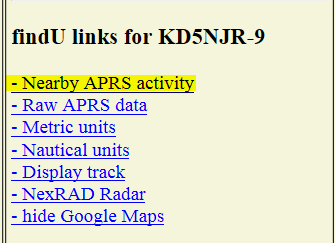 Let’s say we think Scott is the net controller.What interesting is going on around him ?Is he sending any bulletins or objects ?Try the link : http://www.findu.com/cgi-bin/find.cgi?call=KD5NJR-9 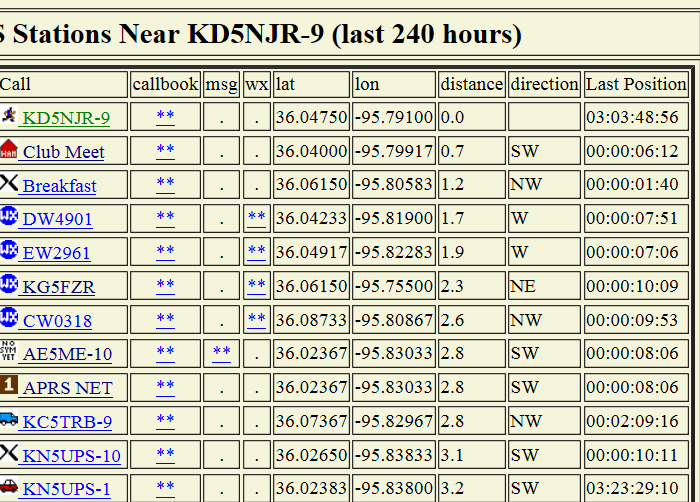 Since Scott is at the parade, he isn’t sending a NET TODAY bulletin.The APRS NET bulletin is coming from Jeff.  It matches the LAT/LON of his AE5ME-10 station.

Viewing BulletinsTBDReading MessagesEdit this hyperlink below  to reflect the callsign and SSID of the net controller.http://www.findu.com/cgi-bin/msg.cgi?call=kd5njr-6

NOTE: similar functionality is available on APRS.fi  See later on in this document. http://www.aprs.fihttp://aprsisce.wikidot.com/doc:aprs-viewing-via-the-internet
ANSRVRhttp://www.findu.com/cgi-bin/msg.cgi?call=ANSRVR
You can try it out, but it’s pretty disorganized.  Sorted by time. And not really by topic.

Via a Smartphone App
I’ve found that www.aprs.fi works pretty well on the iPad.But there is an APRS.fi app as well.  The app doesn’t really help you send messages or view them, but it can turn your phone into an APRS tracker.
For those in the Android universe, here is an option.http://www.wcares.org/special-interests-3/aprs/aprs-hardwired-cell/https://www.youtube.com/watch?v=T7hot6_K6e4
Apple iPhone users may investigate iBCNU or another program in the App Store.http://www.aprs.org/aprs-messaging.htmlBut that screen is awfully small to be tapping stuff on the map and otherwise navigating around.
Viewing ObjectsTBDViewing BulletinsTBDReading MessagesTBDSending MessagesTBDANSRVRTBD
Via an APRS-enabled HTWhile not the low-cost option, this method uses a lower overall number of “parts” and uses the Internet to lesser extent than other methods.  After all, it’s amateur radio.Kenwood TH-D72http://www.ssiarc.ca/TH-D72A_Notes.phphttp://www.kenwood.com/i/products/info/amateur/pdf/TH-D72AE_IDM.pdf(maybe you can get a steal of a deal on a used TH-D7 you can sure send messages with that one too)
Yaesu FT-1 series http://ve3ugg.com/2015/03/ft1dr-aprs-messaging/(watch for sales)
Viewing Objects 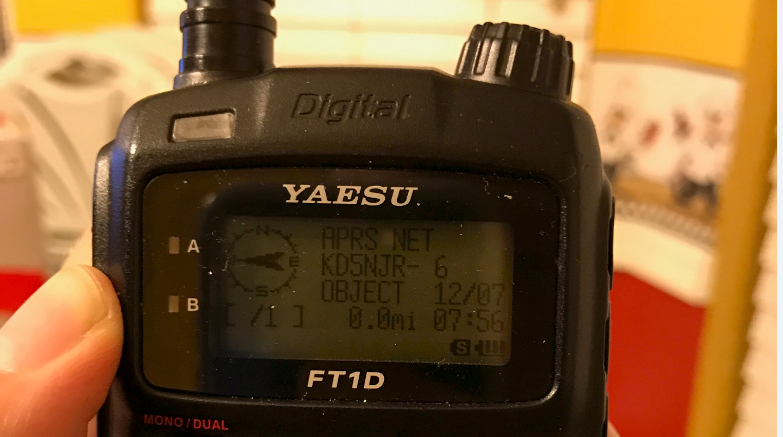 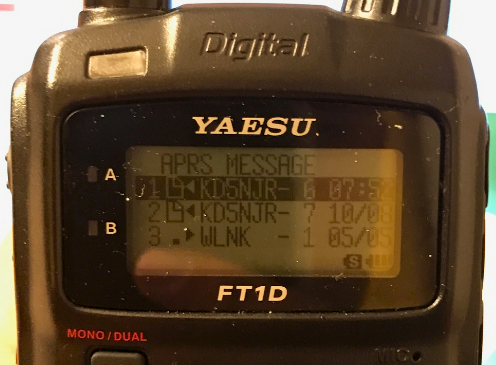 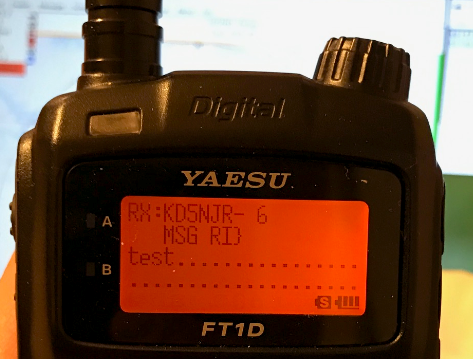 You can see that brevity is important.
Sending MessagesI need some more practice on the FT1.  I think I keep looking for the hyphen when entering the callsign / SSID.
ANSRVRIf you don’t mind the initial set up of subscribing to the group and typing the extra CQ OKAPRS (or finding an old message to edit that already has it ) ANSRVR is a more graceful way communicate in bulk.  It’s preferable to QST or ALL as those methods will activate a lot of radios depending on your path.

Participation via APRSIS32This is probably the best way to fly.APRSIS32 is still under development / support and has an active user community.APRSIS32 can be configured to use the Internet and/or a radio setup.(Some consideration should be paid to how you set the RF vs. IP tickboxes on the message composition screen.)For initial setup help, refer to G4ILO’s YouTube video.When it comes to setting your path, see this : http://www.aprs.org/APRS-docs/APRS.TXT
When possible, I try to use APRSIS32 to participate in the net.(My backup plan is the use the TH-D72 to send messages because I’m pretty fast in those menus.)
http://www.g4ilo.com/aprsisce_install.htmlhttp://www.g4ilo.com/aprsisce_gs.html
http://www.qsl.net/yo4tnv/HamSoftware/APRSISCE/Welcome%20to%20APRSISCE%2032%20-%20APRSISCE%2032%20The%20future%20of%20Amateur%20Radio%20APRS.htmViewing ObjectsTBDhttp://aprsisce.wikidot.com/menu:messages 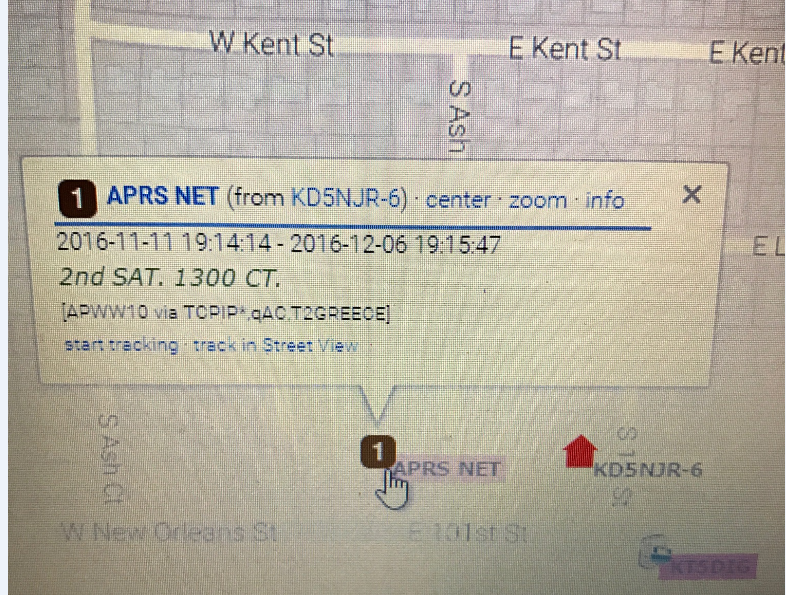 Sending MessagesTBDhttp://aprsisce.wikidot.com/menu:messagesUse the white TX box underneath the gray receive box.Remember to experiment with the BEST or RF tickbox.Don’t forget to press SEND.
ANSRVR 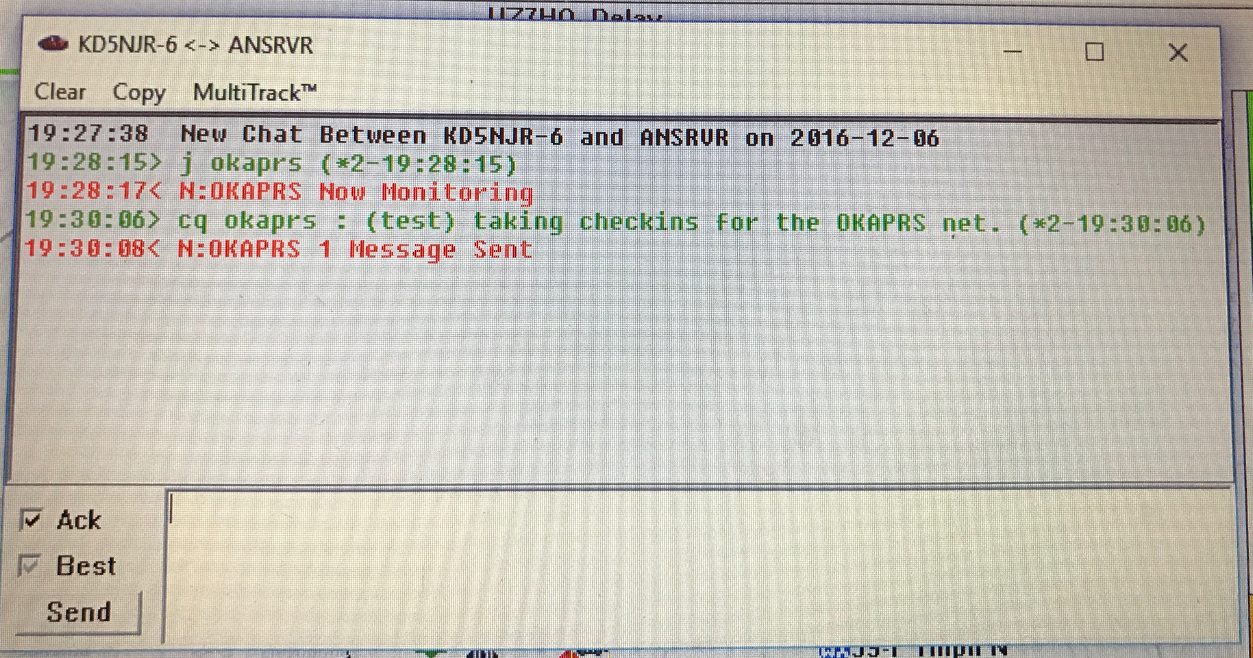 You’ll want to be talking to ANSRVRhttp://aprsisce.wikidot.com/doc:ansrvrhttp://www.aprs.org/cqsrvr.html

Thanks to Scott Haley, KD5NJR for this information.